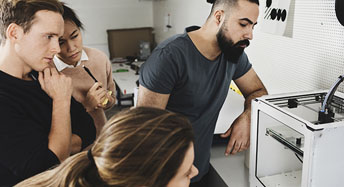 The EUROSTUDENT VII study examined the living conditions, studies, social background and livelihoods of students in higher education. Over 7,000 students in higher education responded to the survey carried out in spring 2019. Finland's national results were published in September 2020. The five research papers now published support the national report and give it thematic depth.

“The knowledge base used in the national EUROSTUDENT VII report and in these research articles is both unique and of great value. These studies bring us more in-depth understanding and allow us to strengthen research-based knowledge in decision-making in higher education,” said Director General Atte Jääskeläinen.

The findings in an article by Jenni Lahtinen, Tina Lauronen and Virve Murto on Gender atypical educational choices and differentiating career paths show that, with age, men are more likely to make choices that cut across traditional gender boundaries.

The later men start higher education, the more likely they are to study in a gender atypical field. In the case of women, it seems that a similar linear link to broaden their horizons in educational choices does not exist among women as they mature.

International studies show that there are many ways in which students studies can be supported so that they can succeed in their studies. When assessing the impact of the COVID-19 pandemic, it is important to take into account especially students who experience different functional limitations and to invest more extensively in solutions that promote study progress and accessibility in higher education. The social security system should also take better account of students who experience difficulties in their studies.

Policies that promote the openness of society, economic growth, job creation and labour market policies were highlighted in the responses. Besides employment policy objectives, it might also be necessary to take into account how responsive the society is towards foreign students.

The most significant reason for preferring to stay in Finland seems to be the respondent’s family situation, i.e. whether the student has children and the number of children. In the light of this analysis, it seems that students who have one child already have an intention to stay in Finland and the intention becomes stronger when they have more children.

Preparation courses linked to the popularity of the field of study

An article by Juhani Saari, Alina Inkinen and Suvi Jokila on Students' motives for preparation courses and application examines how prospective students apply for higher education and how the students’ background impacts it. Student motivation based on parents' expectations was stronger among younger students and international students whereas more mature students and especially female students were motivated by the desire to support the wellbeing of others through their studies.

The article also examined taking part in preparation courses. The findings were that preparation courses were linked to the popularity of the field of study. The fields that stood out the most were law, medicine and veterinary medicine, where more than 70 per cent of applicants who were admitted into a higher education institution had taken part in a preparation course. As an exception to the trend, which was otherwise quite straightforward, the educational fields of communications and information sciences (speech science, communications) and especially the arts were ones where there is a negligible market for preparation courses.

In the most competitive fields, those who gained a student place through a preparation course had one or both parents who were highly educated. Taking part in a preparation course was linked, on the one hand, to the desire to help others and, on the other hand, to an orientation focusing on improving the student’s own position in society.

A significant part of all students consists of marginalised groups

The review showed that marginalised groups account for a significant proportion of the student population in Finnish higher education institutions. More attention should therefore be paid to how gender equality policy measures are formulated both at the level of the system and at the level of higher education. A key step in the consideration of marginalised groups is to recognise their diversity.

Almost a quarter of the higher education students who took part in the Eurostudent survey had some kind of physical disability, functional disability or a long-term health problem. Nearly 15 per cent of the respondents had a long-term mental health disorder.

The difference was negligible between students with an immigrant background and Finnish students as to the extent to which they believed they would complete their degree. There were no differences in general attitudes towards the future. The majority of respondents were confident about the future and finding a job. However, if no jobs were available in Finland, second-generation immigrants were more prepared to move abroad to seek work. Those with mental disorders face the greatest problems and challenges and these are reflected in their studies and life in general as a more pessimistic outlook on the future. They were also at a higher risk of discontinuing their studies than the other marginalised groups.