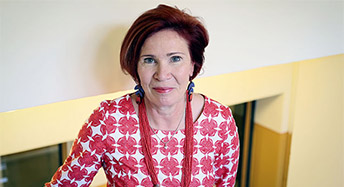 Iina Soiri, senior specialist served as Director of the Nordic Africa Institute (NAI) and as a political researcher in her earlier positions. She has been part of the Team Finland Knowledge network since autumn 2019. Stationed in Pretoria, she analyses Africa’s rapid advances though the eyes of Finnish higher education institutions and in terms of sharing Finnish knowledge, expertise and educational innovations. Every visit to local universities reinforces the understanding that future innovations are being made here. Indeed, many other countries are already strongly established in southern Africa. Finland’s reputation in the region as a fair partner and a nation with a success story in education means that there is plenty of room for more Finnish actors on this large continent.

With over one billion inhabitants living in 55 countries, Africa is a huge continent that is evolving in many ways. Africa is home to a high percentage of young people and one of their most common desires and challenges is to be able to study. Under the leadership of the African Union and the national policies of the African countries, efforts are being made to increase and improve the continent's capacity and participation in scientific production on a global scale. The continent’s higher education institutions cooperate with actors such as the African Research Universities Alliance (ARUA) and the African Academy of Sciences. The specialist post in Pretoria focuses mainly on southern Africa, concentrating initially on three countries, namely South Africa, Namibia and Mozambique.

Finland’s key country in Africa for Finnish knowledge, expertise and educational innovations and expertise[031] [BM(2]  is South Africa, even though the markets in South Africa focus on the private sector. Owing to the challenges in teaching and learning outcomes in South Africa, Finnish teacher education constantly attracts interest in South Africa. Namibia and Finland have extensive mutual knowledge and they cooperate in many areas - including education and science. The university satellite campus in Namibia is the only Finnish one joint effort between the University of Turku and the University of Namibia (UNAM), where start training in the field of information technology will start. Namibia could easily be a springboard for wider markets, such as South Africa or Angola. In fact, Angola has already expressed interest in Finnish teacher education expertise. In Namibia, the quality of teaching is rather poor and inequality is one of the greatest social problems. Finding a common solution to these issues offers opportunities for many international actors.

Mozambique is also of interest to Finland from the point of view of higher education and science, because Finland has a well-established educational sector programme in Mozambique financed by development cooperation funds. Mozambique has worked together with Finland in science and research for a number of years already, and the local ‘IESE Istituto de estudos sociais e economicos’ (institute of economic and social studies) receives support from Finland. In addition, there is potential from the point of view of sharing knowledge and expertise in Mozambique, because there are also private educational institutions in the education sector.

In southern Africa, the focus is on regional impact, underscoring ways to reinforce global responsibility and capacity and on stepping up related cooperation and sharing Finnish knowledge, expertise and educational innovation. Enhancing student and researcher mobility and cooperation between higher education institutions and businesses between South Africa and Finland are considered important. To make activities more effective, Finland should offer instruments similar to those provided by other countries that enable mobility and scientific cooperation.