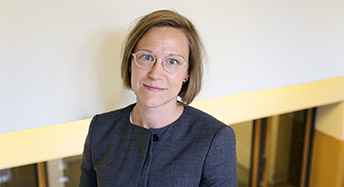 Sari Eriksson started working at Finland’s Embassy in Moscow in early September 2019. In her earlier job as a researcher, her work involved studying the changes in Russian higher education and science policy. Eriksson has lived and worked abroad for the past ten years (Uzbekistan, Poland and Russia), giving her deeper insight into the kind of Finnish knowledge and expertise that are of interest around the world. In late December 2019, Eriksson completed her doctoral thesis on post-socialist higher education for the University of Helsinki. An enthusiastic member of Team Finland Knowledge, she is tasked with sharing Finnish knowledge and expertise with Russia.

A strong education system was built during the Soviet era, and the legacy is still reflected in a high level of scientific, medical, space and aviation research. Russia recognises that higher education and science are instrumental for developing modern society. To this end, Russia intends to invest in national science and training programmes to develop higher education and allocate resources in education and science to improve competitiveness. The main objectives of Russia’s national science programme is to raise Russia into the top five countries in research and development, to ensure that scientific jobs remain attractive and to increase funding for domestic research and development. The programme is based on concerns about the brain drain and lack of innovation.

Russian higher education institutions recognise that international cooperation is important for achieving their own goals. To this end, the Ministry of Science and Higher Education of Russia has set a target of doubling the number of foreign students by 2024. With this in mind, Russia is intent on modernising its higher education by investing in infrastructure.

Finland and Russia – cooperation and partnership

Finland and Russia have very close relations. A study commissioned by the Ministry for Foreign Affairs shows that as many as 71% of Russian respondents said they have a positive attitude towards Finland. Traditionally, Russia has been an important trading partner for Finland and that is still the case.

Russia values Finnish education, knowledge and expertise. Over 63% of the Russian population holds a degree in higher education (OECD, Education at a Glance 2019). Russian students have formed one of the largest groups of foreign students in Finnish higher education institutions over a number of years already, and Finnish higher education institutions and scientific research institutes hold Russian postgraduate students in high regard. Moreover, Finnish researchers work closely with their Russian counterparts, especially in the field of natural sciences.

Finland possesses special expertise in how to develop the work of teachers, in how to plan education and in how to reorganise learning environments. All these areas of expertise are of interest in Russia. Russia is interested in hearing what Finland has to say, and Finnish knowledge and expertise are widely appreciated in other reform areas too. For example, Russia is interested in Finnish expertise in waste management, as Finland has not only technological expertise but also knowhow in the construction of comprehensive solutions and value chains. A more active role of Finnish higher education institutions as providers of environmental education and as trainers in specialised areas in waste management would help Finnish companies in reaching their export targets in Russia while also opening up new opportunities for sharing Finnish and educational services.