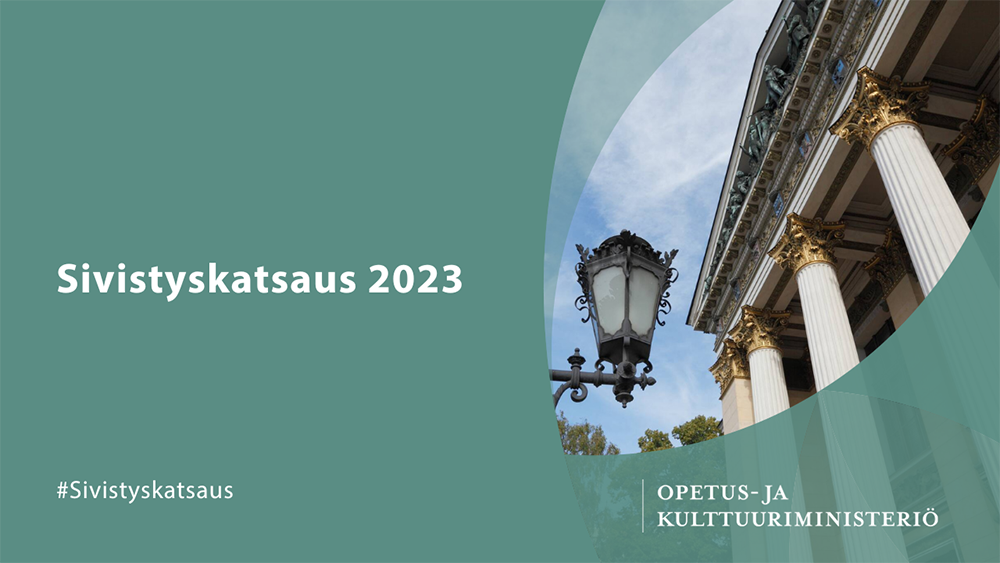 The Ministry of Education and Culture has published the first bildung review, which provides an overview of development in the Ministry’s administrative branch over the past decades. The latest stage, which began in the 1990s, is characterised by a decline in the achieved learning outcomes, the plateauing of the rising level of education among Finns, as well as a gradual decrease in public input into education.

From the 1950s to the early 1990s, the education sector experienced strong growth. Comprehensive school, the reform of upper secondary education, and the expanding higher education sector offered Finns greater access to education. The achieved learning outcomes topped international rankings, and the level of education of Finnish young adults was the highest of industrialised countries. By the early 1990s, libraries and art institutions had come to form a nationwide network.

In the 1990s, financing for the education sector began to decrease in most areas. The improvement in the educational level of young people ended with the age group born in 1975. The long-term improvement in young people’s learning outcomes ceased and turned down by the end of the millennium. The reach of libraries began to decline in the 2000s, and public subsidies for many fields of art decreased, never to return to the level preceding the recession of the 1990s.

After the mid-2010s, the introduction of compulsory pre-primary education and the extension of compulsory education made for longer obligatory attendance in education. The share of young people pursuing upper secondary education of their age group increased for the first time since the 1980s. The range of higher education opportunities began to increase, as education was targeted increasingly at first-time applicants to reduce multiple higher education studies, and student intake was raised substantially during the coronavirus crisis. There is a wide consensus about the need to increase research and development funding until 2030.

Proficiency in reading and mathematics strengthened in Finland from the 1960s to the 1990s, reaching the international top in the learning outcomes assessments conducted in the late 1990s and early 2000s.

Internationally speaking, the decline in achieved learning outcomes, which began in the early 2000s, has been exceptionally rapid in Finland, and the drop in reading and mathematics proficiency observed in several studies corresponds to the learning attained in one year – even two years, according to some research data. Despite the notable decline, young people’s achieved learning outcomes are still good in international comparison, as indicated by many international assessments.

Differences in learning outcomes related to social background have become more pronounced than earlier. Moreover, the differences between genders are exceptionally large from an international perspective, and have continued to increase in the 21st century.

Decrease in the level of education

Appreciation of the teaching profession

Companies account for the steepest growth in the number of researchers

The educational level of research and development personnel has risen especially in the 21st century. In 2000, doctoral degree holders accounted for 15 per cent of the R&D personnel, compared to 23 per cent at the end of the 2010s. The share of employees with a university education increased from around one third in the early 1990s to nearly 45 per cent in the 2010s. Women’s share of researchers has remained at around one third since 1987.

The increase in the number of R&D staff and full-time equivalent employees has long been faster in companies than in higher education institutions, the public sector or private non-profit organisations. Since 2017, the number of researchers has surged especially in the corporate sector, and is now approaching 90,000.

The collections of public libraries and the number of borrowers increased from the 1960s to the early 1990s. Funding for public libraries decreased significantly in the 1990s, and the drop in resources could be seen especially in the sharp decrease in the libraries’ purchases of books and other materials. Library borrowing has decreased notably after 2006, while libraries’ book collections have shrunk. In the early 2020s, the share of borrowers of the general population had decreased from half to one third. Library use has fallen especially in the younger age groups.

Art audiences have increased widely for different forms of art. For example, the long decline in the number of filmgoers turned upward in the 1990s, increasing by some 60 per cent from 1995 before the coronavirus crisis. The boost in the film industry has resulted in trend-like growth in the support provided by the Finnish Film Foundation, in more Finnish film premiers and in increasing audiences for Finnish films.

Decline in exercise and sports

Around 80 per cent of adults say they exercise. The share of the population that does not exercise has decreased by one third since 2000. The number of people employed in sports and exercise is increasing. Among other things, this is related to the increasingly professional operations of sports and exercise clubs.

According to the results of the Move! test, carried out among pupils in the 5th and 8th grades, the aerobic fitness of schoolchildren has declined in recent years.