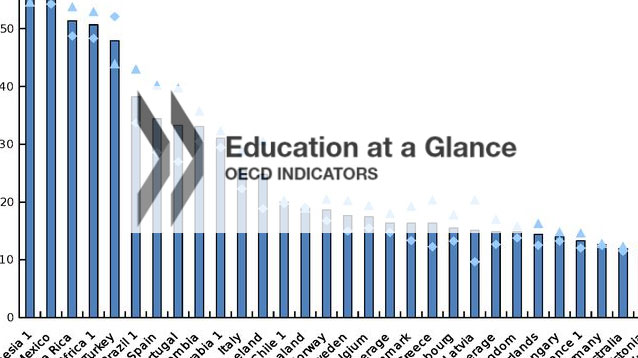 The Organisation for Economic Co-operation and Development (OECD) has published its annual Education at a Glance publication, which consists of internationally comparable indicators of education systems. The main theme of this year’s edition focuses on tertiary education. The report mainly covers 2020.

Tertiary education is expanding rapidly worldwide. Over the first two decades of the millennium, the percentage of younger adults aged between 25 and 34 with a tertiary degree rose in the OECD countries from 27% to 48%. Finland differs from this international trend. The percentage of adults in Finland who have tertiary attainment has remained about the same as before, up from 39% to 40%. This means Finland’s position among the OECD countries has changed. In 2000, the proportion of highly educated younger adults in Finland was among the highest in the OECD countries, in the same league as the United States and South Korea. In 2021, instead, Finland’s position had dropped well below the OECD average, ranking at the level of Chile and Turkey.

Among the adult population of 25-64-year-olds, Finland’s relative educational attainment shows the same trend with a lag. In 2011, the percentage of adults in Finland with a tertiary degree among the working-age population was 7.8 percentage points higher than the OECD average (Finland 39.3%, OECD 31.5%). In 2021, a total of 41.1% of 25-64-year-old adults in OECD countries had tertiary attainment, while in Finland the percentage was 42.3%. Finland has therefore dropped from the highest quarter of OECD countries to the middle range.

Higher education improves job prospects. The employment rate of adults with a tertiary degree is about 10 percentage points higher on average than that of those with an upper secondary qualification in both Finland and the rest of the OECD countries. The employment rate differences have remained at roughly the same level throughout the 21st century.

The benefits that tertiary education bring vary between men and women. The employment rate of women without secondary attainment was only 38% in Finland, compared with 86% among those with a tertiary attainment. The corresponding percentages for men are 57% and 89%. In other words, lack of education is a risk for women’s job prospects in particular.

Although the gender gap in labour market outcomes becomes narrower as the level of education rises, education has failed to equalise differences in the level of earnings to an equal extent.

The participation rate of children under the age of 3 has also risen in Finland. It was 37% in 2020, while in 2015 it was 28% and a decade earlier it was 25%. By Nordic standards, Finland lags behind the rest of the Nordic countries.

Career choices in vocational education and training in Finland are still very strongly gendered. Only 19% of those who had completed a qualification in technology were women, whereas the percentage of women in health and wellbeing was 85%.

Teachers’ salaries, except for early childhood education and care, are at a good level by international standards

The average range in teachers’ salaries is between USD 41,941 and 53,682 in OECD countries when examining the salaries of teachers ranging from early childhood education through to teachers in general upper secondary education. In Finland, the salary scale is wider (USD 38,128 to 62,714), which is partly due to the pay level for teachers in early childhood education and care, which is below the OECD average. Teachers’ salaries at other levels of education in Finland are higher than the OECD average.

On the other hand, wage developments over the course of careers is moderate in Finland. For example, the scheduled pay rate of teachers in lower secondary schools in Finland increases by about 30% from their starting salary, while in South Korea it may rise up to 2.8 times higher.

Proportion of young people with NEET status has declined in Finland

The effects of COVID-19 on the economy and the world of work are reflected in participation in education. However, most OECD countries did not experience the worrisome growth in the number of NEETs in the wake of the pandemic.

The proportion of young adult NEETs among 18-24-year-olds rose during the first year of the pandemic in 2020, but fell in 2021 in many countries, including Finland, to levels that dropped even below the pre-pandemic level.

In Finland, too, the proportion of young adult NEETs decreased by almost 3 percentage points from around 14.8% to roughly 11.9%.

Contact teaching for about 1.5 billion children and young people was put on hold in 2020 due to the COVID-19 pandemic. During the pandemic, schools were closed for periods of different duration almost all over the world.

Vaccines gradually improved the pandemic situation in 2021. In the academic year of 2021-22, only three OECD countries had nationwide school closures of at least one week in duration. Health security was further emphasised: schools in all countries focused on hygiene, and national guidelines were given on hand washing and cleaning the facilities. In most countries, teachers and students, apart from the very youngest ones, were required to wear a mask at school. In addition, some countries carried out regular coronavirus tests on their pupils, students and teachers.

Inquiries:
Ministry of Education and Culture Policy Analysis: Comparison of educational levels after the Labour Force Survey was overhauled

This year’s publication and publications from earlier years, including links to background statistics, are freely available on the OECD website